For those of you that know me personally reading this blog will know that my main interests in life are photography and also I have read widely and been to many wine producing areas of Europe and am qualified in wine and spirits. Probably my favourite style of wine are  those from Alsace in eastern France.  The wines produced in this region are mainly white but are hugely aromatic such as Riesling and Gewürztraminer, Pinot Gris and Muscat. However this is a side issue to the main reason for this blog but there are links as Germany and France have both over the years held Alsace as part of their country. In fact in the first war men from the same family fought on opposite sides.

This brings me to the main subject of my first blog which describes and photographs my visits to the First World War battlefields in France and Belgium.

My interest in the first war was fuelled by my dad’s stories of my Grandads experiences in the first war and how such terrible conflict shaped the history of the 20th century and in part continues to do so today.

My dad has quite a large collection of my Grandads medals and other items that he collected while serving on the Western front between 1916 and 1918. The main action that he saw was at the Battle of Passchendaele which he entered in October 1917 following a long march to the front from their garrison which I understand was around the Belgian town of Ypres.

My dad told me stories of my Grandads experiences including the horrendous conditions and mud that he fought in at the age of 18. I understand he operated a Lewis gun which probably provided him with more protection than those the standard rifles. I also understand that he committed an act of extreme bravery when he took out a German sniper post alone allowing the allies to progress their advance across the battlefield.

My Grandad was also injured during the war and spent time recovering on the south coast of England prior to his return to the front met my grandma, who was born and raised in Eastbourne.

My first visit to the Somme battlefield was in 2005 on a summer holiday that year. I had done my research into the area and had a number of places planned to visit during the stay.

Our first visit was to the Thiepval Memorial. This memorial contains the names of approximately 72,000 soldiers that have no known grave on the battlefield. I found this extremely moving, as the whole area at the time of our visit was a beautiful summer day in August, which was the time of year that the battle was raging.

It was hard to imagine that some 90 years previously the whole area was subject to a horrendous battle when many lives were lost on both sides.

Our next trip was to the Beaumont Hamel preserved battlefield where the trenches have been kept. They are now grassy banks but during the visit you are able to walk along the allies communication trench to the allies frontline and across no man’s land to the line of the first German trench, a walk of very few hundred yards.

Part way across no man’s land there is a tree known as the sacred tree, it is understood that by the time that the Newfoundlanders had reached this position in no man’s land that most of the troops had been either killed or wounded from the machine-gun fire from the German positions.

Following the German front-line trench you reach the Y Ravine which was used to supply the German trenches.  It was thought that on 1 July 1916 following a huge artillery bombardment of the German trenches that these trenches would have been destroyed and the German occupiers would either been killed or fled, but the Germans were well dug in and following the cessation of the artillery bombardment were able to come from their dugouts and inflict huge casualties on the Allies side by use of their well dug in machine-gun posts.

Another area I wish to visit was in the northern sector of the Somme battlefield at Gommecourt.

Many years ago I was  given a book about the first war by my parents, and within that book there was a map of this sector of the battlefield showing the trench layout and a machine-gun post called The Z.

Looking left we could work out the approximate position of the Z machine-gun post and at this point you could almost imagine the British troops leaving the trenches and heading across no man’s land to the German trenches only to be cut down by machine-gun fire from this location. There is also a cemetery here when many soldiers are laid to rest. 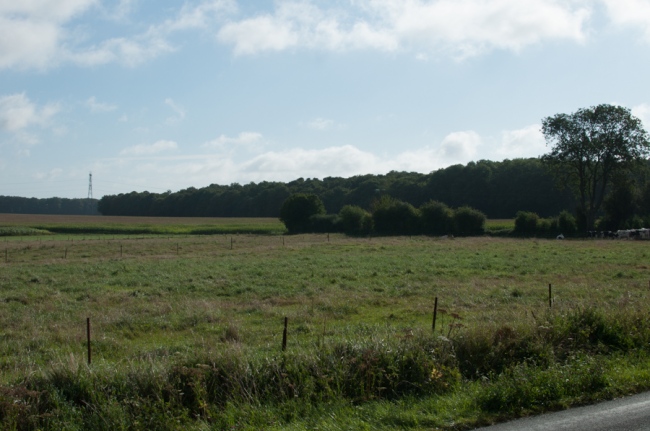 We have also visited the Tyne Cot Cemetery in Belgium at Passchendaele which houses the graves of thousands of British troops that were killed during the battle. My Grandad would have been in this area in 1917/1918. 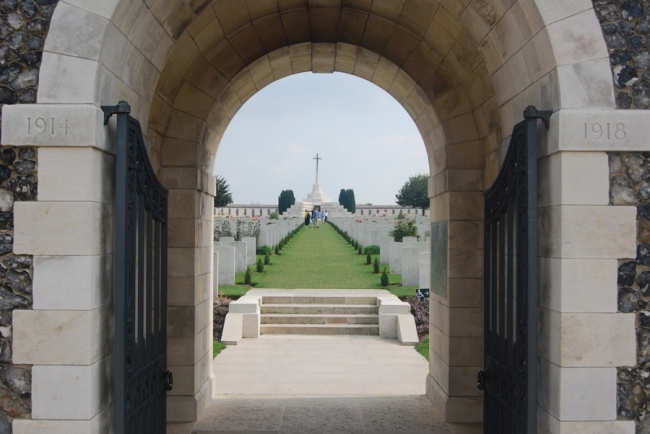 In modern life it is difficult to imagine such enormous suffering for both sides during this conflict, and the effect that it had on families who are at home. I do note that we have troops abroad at this time who continue to loose lives and affecting family in the pursuit of freedom.

I am here today because my Grandad met my grandma whilst recovering from injury on the south coast during his active service, so in a way my life has been affected by the war and his life at such an early age.

My grandad returned home after the war and built a successful business, had nine children including my dad, but I understand he was a strong man and at times could have been considered cold and heartless. However when you consider what he went through at a young age it is no wonder that he may have been the way that has been described to me.  Others may disagree.

This blog is not meant to be a political post but a statement of fact.  I considered my first blog for some time and have been encouraged by Tracy Edwards to do so,  and is meant to reflect who I am and where I have come from.  It is here so that we can appreciate that what we have in our county is freedom and the ability to change things if we have the drive and ambition due in part, and a big part to the courage of our forefathers.

I hope to share with you my more pleasurable experiences in the coming time, but thought that the foundation of my blog would start from a period of history when suffering of this scale might not be fully appreciated in today’s modern world.